Precast beams with straight, fully bonded tendons are very convenient for detailing and manufacture. However, one of the advantages of prestressing, namely using the dead toad of the unit to reduce transfer tensile stresses in the concrete, is lost in such members, because this tension becomes most critical at the ends of the beams, where the relieving effect due to dead load is zero. The techniques of deflecting and debonding tendons are therefore often used in pretensioned beams to achieve a prestress distribution similar to that achieved by the draped profiles of post-tensioned systems. This retains some of the dead-load advantage, resulting in fewer tendons in the beams or a slightly smaller depth of beam than would be possible with straight, fully bonded tendons. 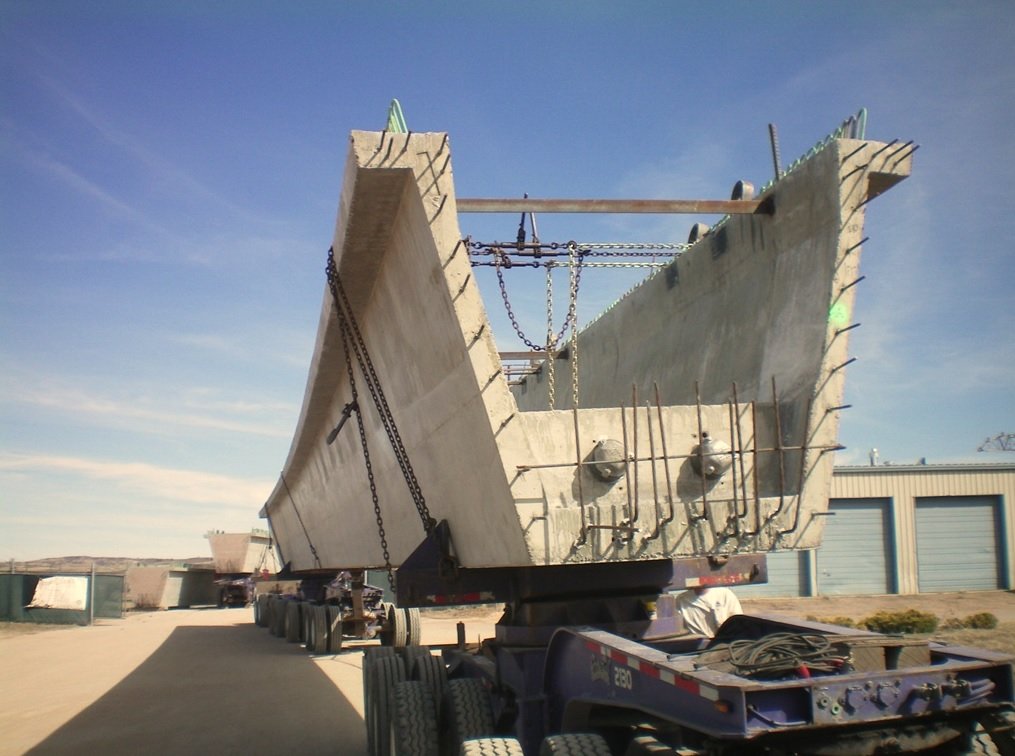 U Tub Composite Bridge Girder being Transported to site

The technique of deflecting some of the tendons upwards towards the ends of a beam at a suitable position along the span shifts the critical section at transfer to this position, where significant relieving stresses due to beam dead-load bending moment may be available. The number of tendons to be deflected and the position of the deflection point are decided by the design engineer on the basis of stress calculations for the end regions of the beam. The deflection point is usually in the neighborhood of the quarter-span position, where three-quarters of the mid-span value of dead-load moment is available to counteract the tensile stress (top fibre) due to prestress at transfer. The angle of deflection of these tendons should be arranged such that the effective eccentricity and the prestressing force of the tendons do not produce a tensile stress of greater than N/mm2 at transfer at the critical sections, a limit set in the Code.

This technique of deflecting tendons is particularly suitable where continuity for live loads is to be established in the finished structure because, by deflecting some of the tendons upwards towards the ends of a beam, some compressive stress can be generated in the top fibre at the ends. This is advantageous in resisting tensile stresses caused here by the hogging moments resulting from the passage of live loads on the superstructure. This also reduces the build-up of compressive stress in the bottom fibre due to prestress and live loads or any other loads at the ends of the beam.

Another advantage of deflected tendons is that the Code permits the vertical component of the tendon force to be used in resisting the imposed shear force on the beams in areas which remain flexurally uncracked at the ultimate limit state. Some engineers have argued that this component should also be equally effective in the flexural!y cracked regions and for checking the maximum shear stress condition in the member. Because of some limited test evidence, however, the Code does not permit relief against shear in these latter circumstances. In practice, the shear resistance of any section is determined in both flexurally cracked and uncracked modes and the lower value adopted. The shear links are then designed to carry the remainder of the imposed shear force. Since only the tendons that are located within the web width can be deflected, the strand pattern for the whole unit needs to be carefully selected so that enough strands are available for deflecting upwards towards the ends to satisfy the stress conditions throughout the length of the beam. Figure 18 indicates the casting sequence and a common arrangement for beams with deflected tendons.

The steel strands in a prestressed concrete bridge beam resist the tensile forces generated from traffic loading and the beam’s own weight. At the beam’s ends, those prestressing strands can result in unwanted internal stresses and cracking. An alternative technique for reducing undesirable transfer stresses is to debond some of the tendons in a graduated manner towards the ends of the beam. Bond between the tendons and concrete is prevented by sheathing the tendons in plastic tubing, the ends being taped to prevent the ingress of grout into the tube. Full stress in the tendon will thus occur at a distance equal to the transmission length from the inward end of the sheathing. By proper curtailment of the debonding tubes, the total effective prestressing force and its eccentricity can be varied over the length of the beam with their maximum values in the mid-span region. 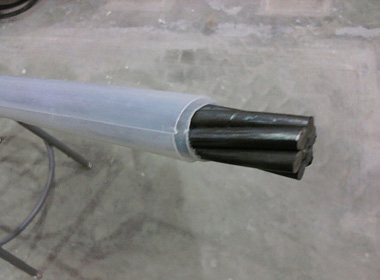 Strands with a soft polymer sheathing

Debonding of prestressing strands is typically achieved by wrapping the ends of the strands with a soft polymer sheathing. It was found that the soft polymer sheathing was not effective in providing sufficient debonding so nowadays it is replaced with a rigid polymer. The alternative material proved to be an effective way to create more clearance between steel and concrete and ensure debonding behavior. This solution carries a small tradeoff in ease of beam construction. The rigid sheathing lacks a split seam along its length that now facilitates the application of traditional soft sheathing.

Idealized diagrarns in which variations over the transmission lengths are ignored are usually adequate for hand-design purposes. The actual number and length of tendons to be debonded will be controlled by the basic requirements of limiting the tensile stresses in the concrete at the top fibres at transfer. and the ability to sustain the imposed load tensions at the bottom fibres with the resulting reduced prestress at the debonding sections. 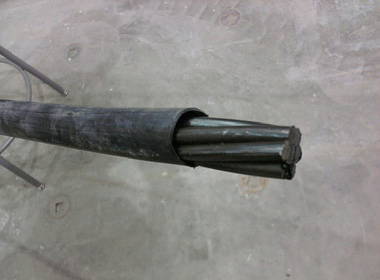 Strands with a rigid polymer sheathing

As a general guide, some 50 to 60% of the tendons can be debonded towards the ends of a beam. However preferably only a few tendons, up to 20 to 25% of the total number. should be debonded at individual sections. Tendons should be debonded symmetrically about the vertical axis of the member. Tendons in the corners of links preferably should not be debonded. Adjoining tendons from a layer of tendons should not normaliy be debonded at the same section. Some longitudinal cracking in the webs may occur within the transmission length due to the bursting force resulting from the dispersal of concentrated tendon forces to the linear stress distribution in the beam.

Traditional soft sheathing on the ends of prestressing strands (left) was not producing the desired debonding effect in bridge beams. The use of rigid tubing as an alternative made the difference. Although debonding is effective for the design of simply supported spans, because of the consequent reduction of prestress, it is less able to provide significant compressive stress in the top fibre at beam ends to resist such support bending moments as result from live loads on the continuous superstructure. This technique is therefore not favoured where continuity for live loads at the intermediate supports is to be established. Where deflecting web tendons does not adequately cater for the stress conditions arising at beam ends (such as those under live-load continuity), debonding a few additional tendons of the bottom flange towards the beam ends may well be advantageous.

Debonding the prestressing tendons towards the ends of a beam effectively reduces the shear strength of the sections in regions where imposed shear forces are at their largest. This reduction in shear strength of the member applies to all sections, whether uncracked or cracked in flexure, and this disadvantage therefore operates equally for both simply supported and continuous construction using such prestressed beams. Since 50 to 60% of the mid-span section tendons can be debonded towards the beam ends, detailed shear strength calculations should always be carried out and additional shear links provided. if necessary, to ensure adequacy against this mode of failure.

No special equipment is required for debonding the tendons. Although this technique appears to be wasteful in terms of tendon lengths, it should be recognized that, for most situations, the total number of tendons required is approximately the same as for the deflected-tendon solution.

Equipment for deflecting tendons is, on the other hand, relatively elaborate, because large vertical forces are required to deflect the tendons at the tensioning stage. A number of different systems are in use which rely on pushing or puling the tendons from above or below the beam forms by various arrangements. To reduce the build-up of stress concentration in the strand at the point of deflection, it is recommended in reference that the minimum radius of the deflector around the point of contact should be at least ten times the diameter of the strand and the total angle of deflection at each point of deflection should be no greater than 150. If these conditions cannot be met, it is advisable to have tests carried out to justify the use of the alternatives.