Local attraction is the phenomenon by which the magnetic needle is constantly prevented to point towards the magnetic north at a place. This is because that these magnetic compass is influenced by other magnetic objects at that locality such as wires carrying electric current, rails, steel and iron structures, steel tapes etc.

Due to local attraction significant amount of error can be occur in compass surveying observations and they will be same on all the bearings. Local attraction can be minimized using following methods:

However if there is no two bearing has a difference of 180˚, we can calculate the correction from the mean value of that bearings which may have least error.

If there is any error exists both sum will not be same. The total error can be distributed among the angles equally because equal error will occur on each interior angle. So starting from the correct observation of bearing which has a difference in fore and back bearing is 180˚, we can calculate all other corrected bearings.

Special Case: this procedure is applied when there is no such observations which has a difference of 180˚ in fore and back bearings of a line. Then two bearings of least discrepancy is selected in such a way that the difference of them is closest to 180˚. The mean value is obtained by adding half of the correction to fore bearing value and half to back bearing. Hence a value which differs by 180˚ can be obtained. So from this corrected bearing value other values can be measured.

The earth acts as a powerful magnet and forms a magnetic field around it. The lines of force in this magnetic field are run from south to north. It is found that if a bar magnet is freely suspended, it will align itself parallel to the lines of magnetic force of earth. They are parallel lines near to the equator. The horizontal projections of these lines can be termed as magnetic meridian. 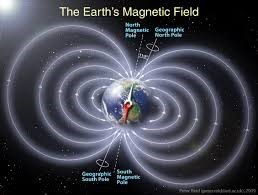 The angle between these lines and earth’s surface is called dip or angle of dip. The lines of force of magnetic field is naturally inclined towards north in Northern hemisphere and inclined towards south in Southern hemisphere. The area where dip is 90˚ because the north latitude is 70˚ and west longitude is nearly 96˚ is called North magnetic pole.

Also a similar area exists in southern hemisphere which is known as South magnetic pole. The dip of magnetic needle will be zero at equator, i.e., the needle will be horizontal. At all other points dip will be acting downwards. 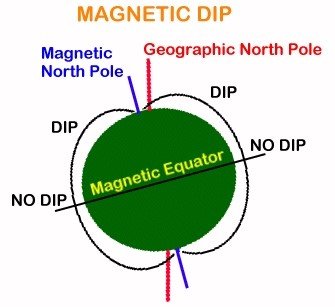 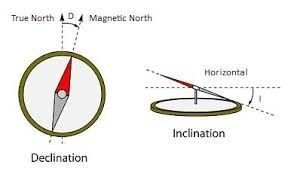